This post originally appeared on Moz and was written by Kerry Jones.

We’ve created more than 800 content campaigns at Fractl over the years, and we’d be lying if we told you every single one was a hit.

The Internet is a finicky place. You can’t predict with 100% accuracy if your content will perform well. Sometimes what we think is going to do OK ends up being a massive hit. And there have been a few instances where we’d expect a campaign to be a huge success but it went on to garner lackluster results.

While you can’t control the whims of the Internet, you can avoid or include certain things in your content to help your chances of success. Through careful analysis we’ve pinpointed which factors tend to create high-performing content. Similarly, we’ve identified trends among our content that didn’t quite hit the mark.

In this this post, I’ll share our most valuable lessons we learned from content flops. Bear in mind this advice applies if you’re using content to earn links and press pickups, which is what the majority of the content we create at Fractl aims to do.

1. There’s such a thing as too much data.

For content involving a lot of data, it can be tempting to publish every single data point you collect.

A good example of this is surveying. We’ve fallen down the rabbit hole of not only sharing all of the data we’ve collected in a survey, but also segmenting the data out by demographics — regardless of whether or not all of that data is super compelling. While this can give publishers a large volume of potential angles to choose from, the result is often unfocused content lacking a cohesive narrative.

Only include the most insightful, interesting data points in your content, even if that means tossing aside most of the data you’ve gathered.

One example of this was a survey we did for a home security client where we asked people about stalker-ish behaviors they’d committed. The juiciest survey data (like 1 in 5 respondents had created a fake social account to spy on someone — yikes!) ended up getting buried because we included every data point from the survey, some of which wasn’t so interesting. Had we trimmed down the content to only the most shocking findings, it probably would have performed far better.

Furthermore, the more data you include, the more time it takes for a publisher to wade through it. As one journalist told us after we sent over an epic amount of data: “Long story short, this will take too much time.”

Consider this: It shouldn’t take a publisher more than 10 seconds of looking at your project to grasp the most meaningful data points. If they can’t quickly understand that, how will their readers?

If you’re going to use data that’s already been reported on, you better have a new spin or finding to present. Journalists don’t want to cover the same stats they have already covered.

A great example of this is a project we created about the reasons startups fail. The majority of the data we used came from CB Insights’ startup post mortems list, which had performed really well for them. (As of the time I’m writing this, according to Open Site Explorer it has 197 linking root domains from sites including BBC, Business Insider, Fortune, Vox, CNBC, and Entrepreneur — impressive!)

It worked well once, so it should work again if we repackage it into a new format, right?

We used the startups featured on the CB Insights list, added in a handful of additional startups, and created a sexy-looking interactive node map that grouped together startups according to the primary reasons they went under. 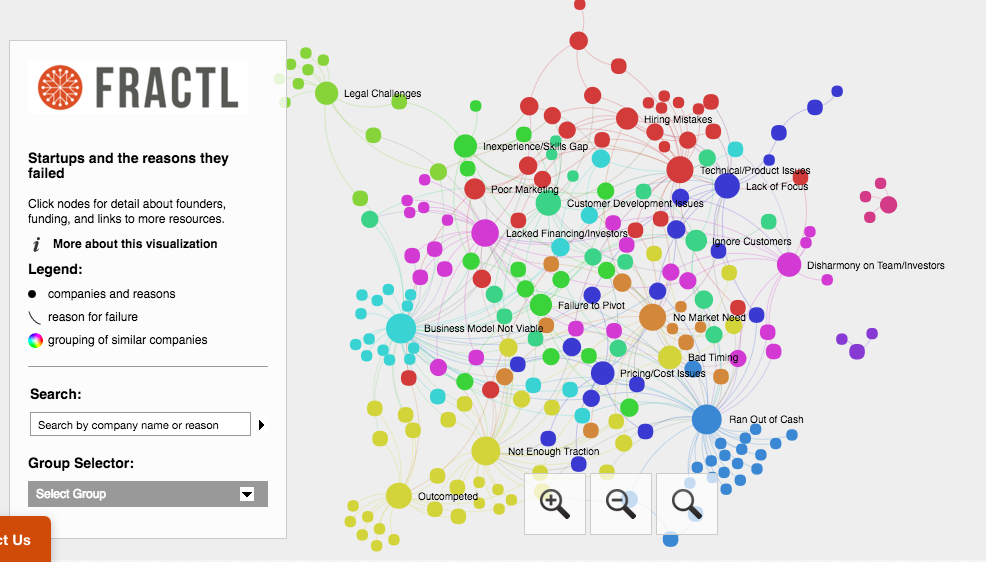 While the content didn’t end up being a failure (we got it picked up by Quartz, woo!), it definitely didn’t live up to the expectations we had for it.

Two problems with this project:

But of course, there are exceptions. If you’re using existing data that hasn’t gotten a ton of coverage, but is interesting, then this can be a smart approach. The key is avoiding data that has already been widely reported in the vertical you want to get coverage in.

Video content can be extremely effective for viral sharing, which is fantastic for brand awareness. But are videos great for earning links? Not so much.

When you think of viral content, videos probably come to mind — which is exactly why you may assume awesome videos can attract a ton of backlinks. The problem is, publishers rarely give proper attribution to videos. Instead of linking to the video’s creator, they just embed the video from YouTube or link to YouTube. While a mention/link to the content creator often happens organically with a piece of static visual content, this is often not the case with videos.

Of course, you can reach out to anyone who embeds your video without linking to you and ask for a link. But this can add a time-consuming extra step to the already time-intensive process of video creation and promotion.

4. Political ideas are tough to pull off.

Most brands don’t want to touch political topics with a ten-foot pole. But to others, creating political content is appealing since it has strong potential to evoke an emotional reaction and get a lot of attention.

We’ve had several amazing political ideas fail despite solid executions and promotional efforts. It’s hard for us to say why this is, but our assumption has been publishers don’t care about political content that isn’t breaking (because it’s always breaking). For this reason, we believe it’s nearly impossible to compete with the constant cycle of breaking political news.

We’ve reached out to publishers to collaborate during content production, assuming that if the publisher feels ownership over the content and it’s created to their specifications, they will definitely publish it.

In general, we’ve found this approach doesn’t work because it tends to be a drain on the publishers (they don’t want to take on the extra work of collaborating with you) and it locks you into an end result that may only work for their site and no other publishers.

Remember: Publishers care about getting views and engagement on their site, not link generation for you or your client.

If you focus on one city, even with an amazing piece of content featuring newsworthy information, you’re limited in how many publishers you can pitch it to. And then, you’re out of luck if none of those local publishers pick it up.

On the flip side, we’ve had a lot of success with content that features multiple cities/states/regions. This allows us to target a range of local and national publishers.

Note: This advice applies to campaigns where links/press mentions are the main goal – I’m not saying to never create content for a certain locality.

And one of those assets should always be a simple, static image.

Many websites have limits to the type of media they can publish. Every publisher is able to publish a static graphic, but not everyone can embed more complex content formats (fortunately, Moz can handle GIFs).

In most cases, we’ve found publishers prefer the simplest visualizations. One classic example of this is a project where we compared reading levels and IQ across different states based on a analysis of half a million tweets. Our Director of Creative, Ryan Sammy, spent a painstaking amount of time (and money) creating an interactive map of the results.

What did most publishers end up featuring? A screenshot of a Tableau dashboard we had sent as a preview during outreach… 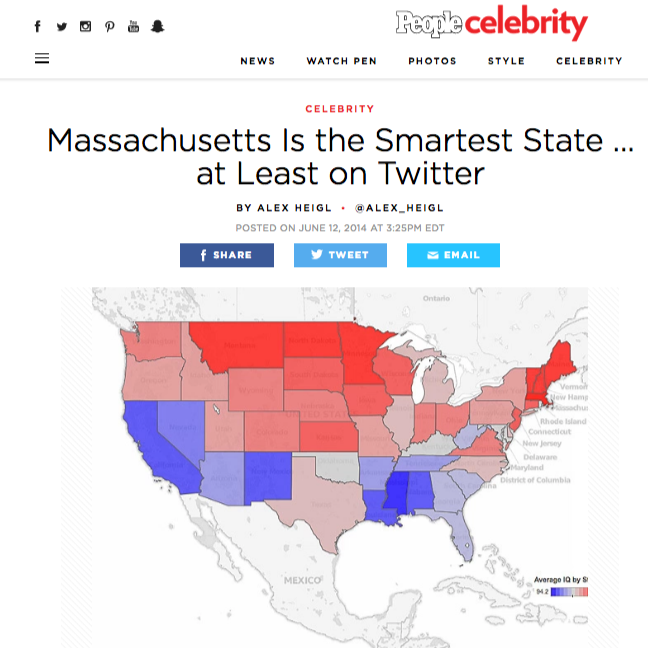 8. Be realistic about newsjacking.

Newsjacking content needs to go live within 24 to 48 hours of the news event to be timely. Can you really produce something in time to newsjack?

We’ve found newsjacking is hard to pull off in an agency setting since you have to account for production timelines and getting client feedback and approval. In-house brands have a more feasible shot at newsjacking if they don’t have to worry about a long internal approval process.

9. Watch out for shiny new tools and content formats.

Just because you are using cool, new technology doesn’t automatically make the content interesting. We’ve gotten caught up in the “cool factor” of the format or method only to end up with boring (but pretty) content.

You greatly increase your risk of no return when you go super niche. The more you drill down a topic, the smaller your potential audience becomes (and potential sites that will link become fewer, too).

Some questions to ask to ensure your topic isn’t too niche:

11. Don’t make content on a topic you can’t be credible in.

When we produced a hard-hitting project about murder in the U.S. for a gambling client, the publishers we pitched didn’t take it seriously because the client wasn’t an authority on the subject.

From that point on, we stuck to creating more light-hearted content around gambling, partying, and entertainment, which is highly relevant to our client and goes over extremely well with publishers.

It’s OK to create content that is tangentially related to your brand (we do this very often), but the connection between the content topic and your industry should be obvious. Don’t leave publishers wondering, why is this company making this content?”

Learning from failure is crucial for improvement.

Failure is inevitable, especially when you’re pushing boundaries or experimenting with something new (two things we try to do often at Fractl). The good news is that with failure you tend to have the greatest “a-ha!” moments. This is why having a post-campaign review of what did and didn’t work is so important.

Getting to the heart of why your content is rejected by publishers can be extremely helpful — we collect this information, and it’s invaluable for spotting things we can tweak during content production to increase our success rate. When a publisher tells you “no,” many times they will give a brief explanation why (and if they don’t, you can ask nicely for their feedback). Collect and review all of this publisher feedback and review it every few months. Like us, you may notice trends as to why publishers are passing up your content. Use these insights to correct your course instead of continuing to make the same mistakes.

And one last note for anyone creating content for clients: What should you do when your client’s campaign is a flop? To mitigate the risk to our clients, we replace a campaign if it fails to get any publisher coverage. While we’ve rarely had to do this, putting this assurance in place can give both you and your client peace of mind that a low-performing campaign doesn’t mean their investment has gone to waste.

What have you observed about your content that didn’t perform well? Does your experience contradict or mirror any of the lessons I shared?